An “aha!” moment: the day I realized I should rethink all the probability theorems using linear regressions. 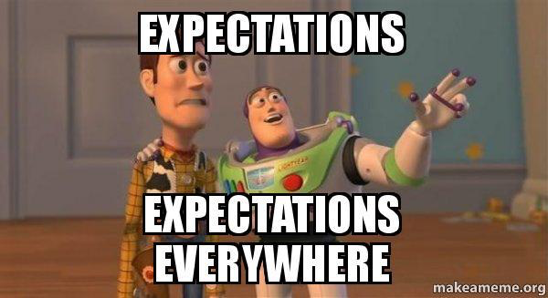 I’ll admit I spent many weeks of my first probability theory course struggling to understand when and why my professor was writing \(X\) versus \(x\). When I finally learned all the rules for expectations of random variables, I still had zero appreciation for their implications in my future work as an applied statistician.

I recently found myself in a rabbit hole of expectation properties while trying to write a seemingly simple function in R. Now that I have the output of my function all sorted out, I have a newfound appreciation for how I can use regressions – a framework I’m very comfortable with – to rethink some of the properties I learned in my probability theory courses.

I soon realized that for what I needed to do, my grouping variable should not be in the regression model. However, I was still perplexed as to how the adjusted and unadjusted group means could be the same.

I created a very basic example to test this unexpected result. I regressed a variable from the new penguins data set, bill_length_mm, on another variable called bill_depth_mm and a grouping variable species. I then looked at the mean within each category of species for both the unadjusted bill_depth_mm and fitted values from my linear regression model for bill_depth_mm.

I saw the same strange output, even in my simple example. I realized this must be some statistics property I’d learned about and since forgotten, so I decided to write out what I was doing in expectations.

First, I wrote down the unadjusted group means in the form of an expectation. I wrote down a conditional expectation, since we are looking at the mean of bill_length_mm when species is restricted to a certain category. We can explicitly show this by taking the expectation of a random variable, \(\mathrm{Bill Length}\), while setting another random variable, \(\mathrm{Species}\), equal to only one category at a time.

More generally, we could write out the unadjusted group mean using a group indicator variable, \(\mathrm{Species}\), which can take on all possible values \(species\).

When I used the predict function on the fit of that linear regression model, I obtained the fitted values from that expectation, before I separated the fitted values by group to get the grouped means. We can see those fitted values as random variables themselves, and write out another conditional mean using a group indicator variable, just as we did for the unadjusted group means earlier.

My table of unadjusted and adjusted Bill Length means thus showed me that:

Or, in more general notation:

Is it true?! Spoiler alert – yes. Let’s work through the steps of the proof one by one.

Let’s pretend for the proof that both our \(Y\) (outcome), \(X\) (adjustment variable), and \(Z\) (grouping variable) are categorical (discrete) variables. This is just to make the math a bit cleaner, since the expectation of a discrete variable (a weighted summation) is a little easier to show than the expectation of a continuous variable (the integral of a probability density function times the realization of the random variable).

Click on the superscript number after each step for more information.

So, we’ve proved that:

which, thankfully, means I have an answer to my function output confusion. It was a lightbulb moment for me to realize I should think of an inner expectation as a random variable, and all the rules I learned about conditional and iterated expectations can be revisited in the regressions I fit on a daily basis.

Here’s hoping you too feel inspired to revisit probability theory from time to time, even if your work is very applied. It is, after all, a perfect activity for social distancing! 😷

I am passionate about meaningful, reproducible medical research.