This post provides an introduction to Modified Treatment Policies (MTPs), motivation for learning about them, and several examples of research questions that can be answered using MTPs. It is organized as follows:

Although this series is for an audience of applied statisticians and data scientists, I hope the introductory post is useful to anyone looking for a conceptual understanding of MTPs.

An Overview of Existing Methodology 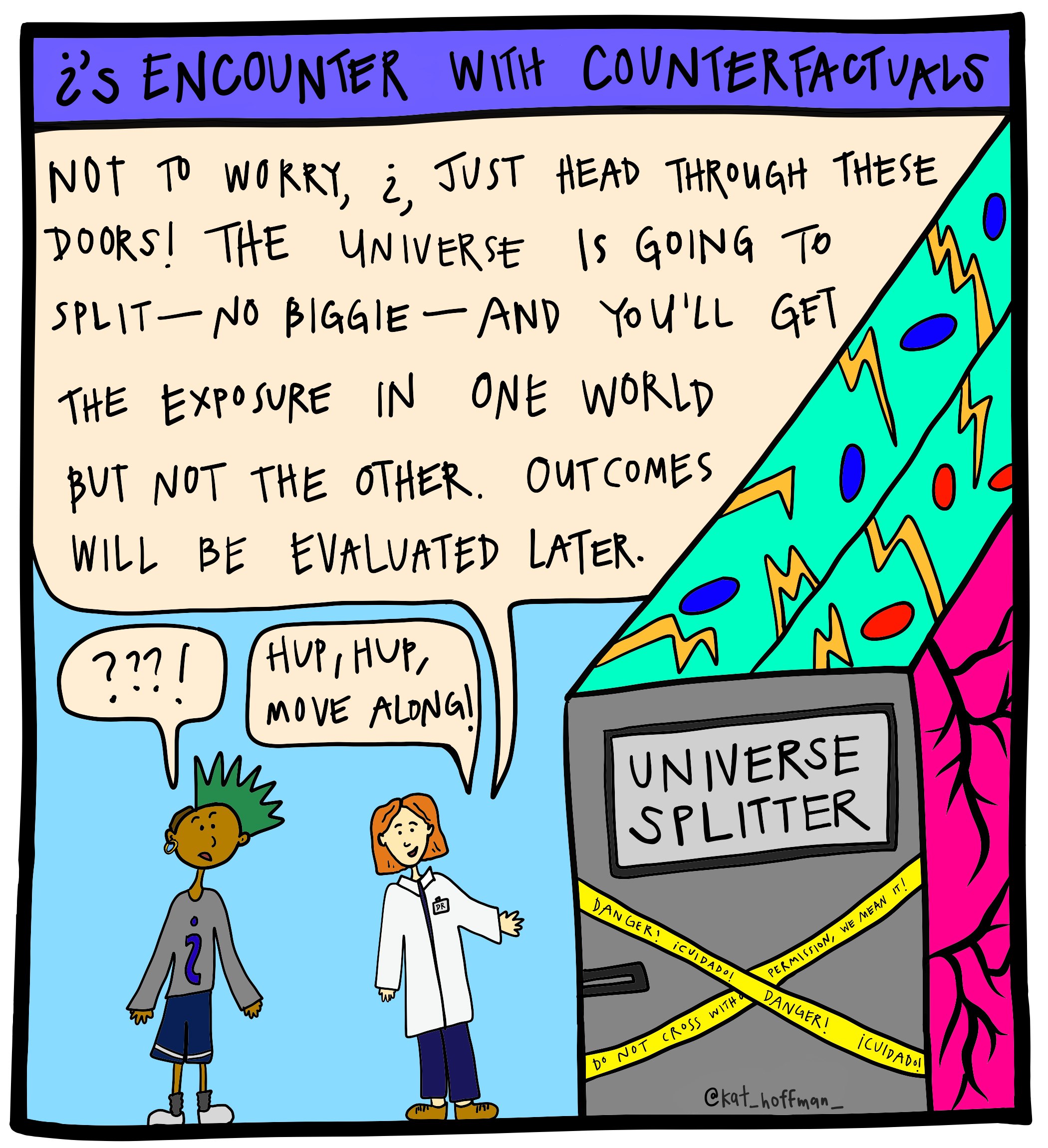 Most modern causal inference methods utilize the potential outcomes framework, which asks questions of what would happen in a hypothetical world in which we could manipulate exposures and then compare outcomes for the same observations under different exposures.

Static interventions are a common approach in causal inference, but a few problems frequently arise.

A key requirement for causal inference is the positivity assumption. This means if you are comparing two exposures (say, treatments A vs. B), for every covariate combination in your dataset, there must be individuals who sometimes get treatment A and sometimes get treatment B. Intuitively, this ensures there is enough “experimentation” in the dataset that effects can be estimated. 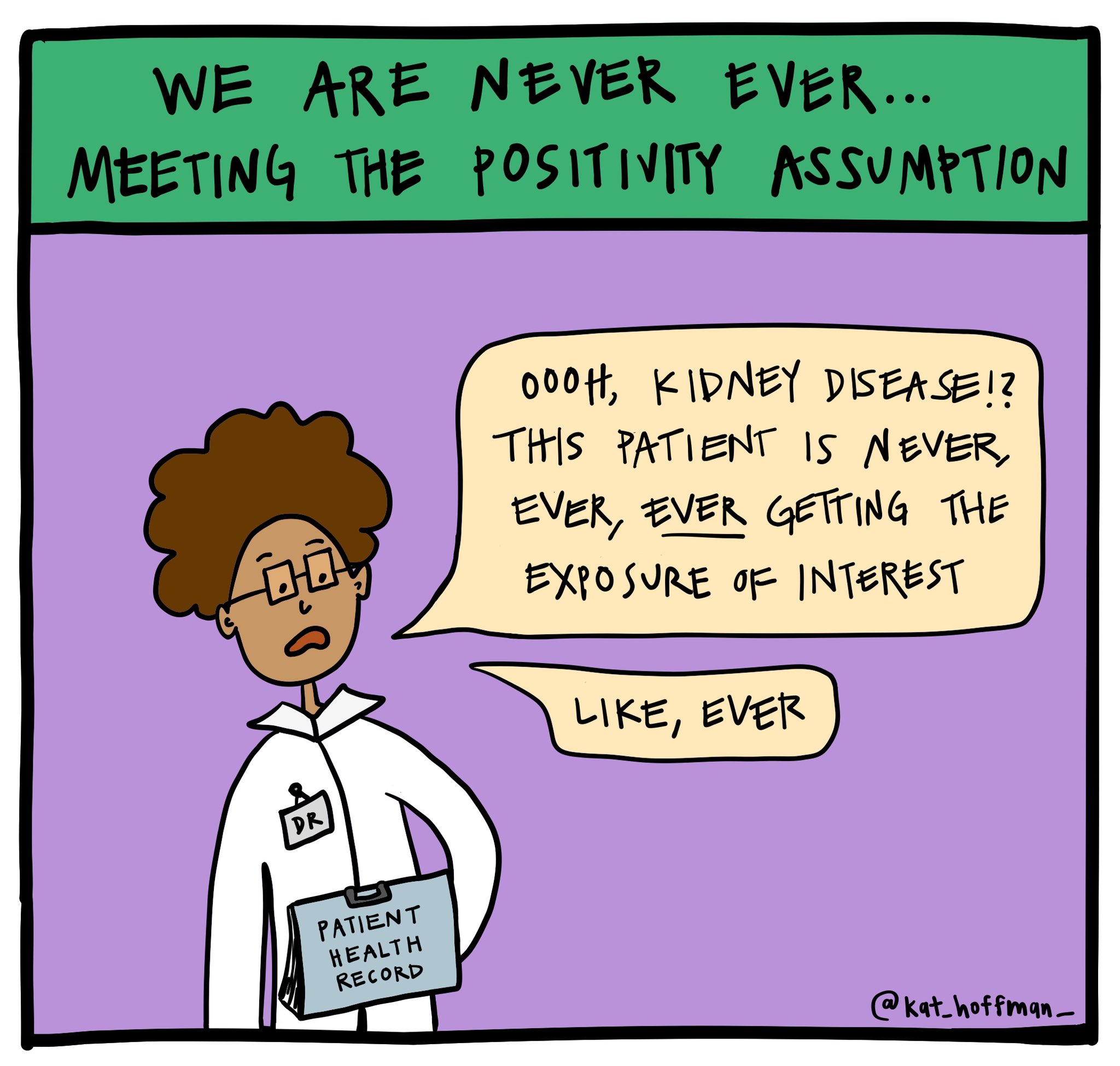 As you can imagine, this often does not hold true. Sometimes there are theoretical positivity violations: for example, if we are studying the effects of a drug for heart disease, cardiologists might say this drug is never given to people who also have chronic kidney disease because the drug damages the kidneys. The probability of a patient receiving the drug conditional on having kidney disease will be zero in all datasets.

Other times we see practical positivity violations, meaning that due to small sample size and/or random chance, there are certain covariate combinations in which few observations receive the treatment of interest in our dataset. Perhaps in a dataset to study the previous example’s heart disease drug, due to random chance, there are no women aged 40-60 years who received the drug in the data. It is not a theoretical positivity violation (i.e. doctors would give the drug to women in this age group), but it is a practical violation nonetheless as it yields small or zero treatment probabilities.

Positivity issues must be addressed, preferably in the planning stage of a study.

A second problem arises with static interventions: there are many situations in which it is not realistic to set everyone’s hypothetical exposure to the same value. Let’s take an example where we are studying the effect of physical activity. A static intervention approach might ask, “what would happen if everyone exercised 30 minutes a week?” Yet there is no actual intervention we could translate to the real world to make everyone exercise 30 minutes a week, i.e. there is no policy a decision-maker could enact to make this happen, even approximately. We could estimate an outcome under this policy, but this unrealistic intervention will likely have a meaningless result.

Notably, you can have an unrealistic intervention without having a positivity violation. For example, we may have access to a large data set with people of all possible covariate combinations who exercise 30 minutes a week; however, it is still scientifically not meaningful or realistic to evaluate a world in which everyone exercises the exact same amount of time.

Dynamic treatment policies or interventions ask what would have happened in a hypothetical world where exposure is assigned based on each observation’s covariate history.

For example, let’s say we want to study the effect of pollution on asthma attacks in the United States. A simple study design could be to find a representative sample of individuals living with asthma, measure their pollution exposure via the Air Quality Index (AQI) on one calendar day (along with other confounders), and record whether an asthma attack occurs within a specified time frame.

Although I don’t study pollution, I know it is scientifically impossible for everyone in the US to receive the same air quality exposure, even in a world with countless environmental regulations. Natural and geographical forces such as wind, wildfires, elevation, proximity to the ocean, etc. make it unrealistic to study a single air quality exposure value for everyone.

This intervention may reduce positivity violations and lead to a more realistic study, yet there are many other interesting questions about air pollution we still cannot answer with dynamic treatment policies.

Problem #3: Static and dynamic interventions cannot depend on the observed exposure

Another key limitation with both static and dynamic interventions is that the hypothetical exposure value is completely determined by each observation’s baseline characteristics rather than the observed exposure. However, there are many interesting scientific questions about interventions that depend on the actual exposure received. For example, a more relevant question for our pollution example could be, “what would have happened in a hypothetical world where everyone’s AQI exposure was 10% lower than what we observed?” Or, “what if the reduction had been 20 units for individuals living in an area with a daily AQI > 100?”

What questions, or hypothetical interventions, would we propose if we did not feel limited by statistical methodology?

We can solve all three problems mentioned above with Modified Treatment Policies (MTPs). MTPs describe hypothetical interventions which depend on the observed value of treatment, possibly in addition to baseline characteristics. We already mentioned two potential MTPs for our pollution example: “what if we reduced everyone’s AQI exposure by 20%?” and “what if we reduced individuals living in an area with a daily AQI > 100 by 20 units?”

An example of a naturally observed exposure of AQI in the US (left) and what it would look like under a hypothetical modified treatment policy in which all observations have an AQI exposure 20% less than what was actually observed (right).

Other interesting MTPs unrelated to pollution might be questions along the lines of: 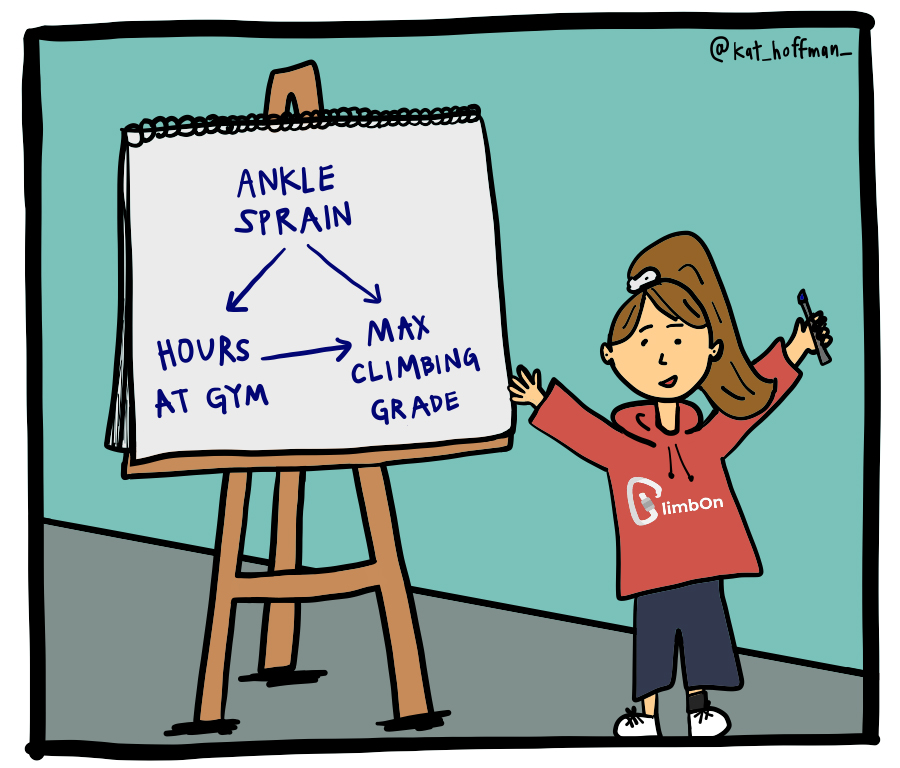 MTPs are an excellent solution for getting around positivity issues to analyze more feasible and realistic interventions. Hopefully this list inspires you to think of MTPs relevant to your own field of study!

A general and unifying framework extending to longitudinal settings

MTPs for cross-sectional, or point-treatment, studies have actually been generalized to exposures and covariates measured at multiple time points, i.e. longitudinal studies. We will refer to this generalization as Longitudinal Modified Treatment Policies (LMTPs), for which there is a corresponding R package called lmtp.

This LMTP methodology and lmtp software allows the user to handle:

This could translate to longitudinal research questions such as:

Future posts will walk through examples of applications like these using the R package lmtp. In the meantime, a recent summary of the literature is described in Nonparametric Causal Effects Based on Longitudinal Modified Treatment Policies by Díaz et al. Although the Díaz paper and accompanying R package are new, LMTP is an extension of causal inference concepts, methodology, and software that are well-established and steadily becoming more widely used.

Here are several other resources I found useful in writing this post:

As with all my posts, I welcome feedback from my intended audience and/or experts of causal inference. I am also open to suggestions of other resources to include in the reference section. Check back later for posts walking through specific examples and R code!

I am passionate about meaningful, reproducible medical research.